Ultraviolet blood irradiation (UBI or UVB) is an intravenous therapy that represents a safe, non-toxic, low cost and drug-free method of treatment for most blood-borne viruses and offers hope to those who suffer from viral infections and related conditions. UVB / UBI is a procedure that exposes the blood to specific ultraviolet light to enhance the body’s immune response and to fight infections and can be used clinically as an immune-modulating therapy in cases such as psoriasis, lymph cancer, chronic infections, chronic fatigue, auto-immune diseases, and much more.

Also known as photoluminescence, hemo-irradiation, photodynamic therapy, and oxidative phototherapy, it was first introduced in the 1930s to combat the poliovirus. The therapy was then extensively used in the 1940s and 1950s with medical conditions including pneumonia, tuberculosis, and even cancer. The advent of antibiotics led to a decline in the use of UVB as a treatment option. Now, with the increasing incidence of antibiotic-resistant infections and a desire for more natural therapies, ultraviolet blood irradiation therapy is enjoying a type of rebirth and a very useful oxidative therapy.

If you or someone you know has recently been diagnosed with cancer or an autoimmune disease, it’s important to gather and learn as much information about the disease as possible. The integrative oncology team at Brio Medical in Scottsdale, Arizona is experienced in the holistic treatment of cancer, Lyme Disease, and other autoimmune conditions and is here to help guide you through your journey to healing. 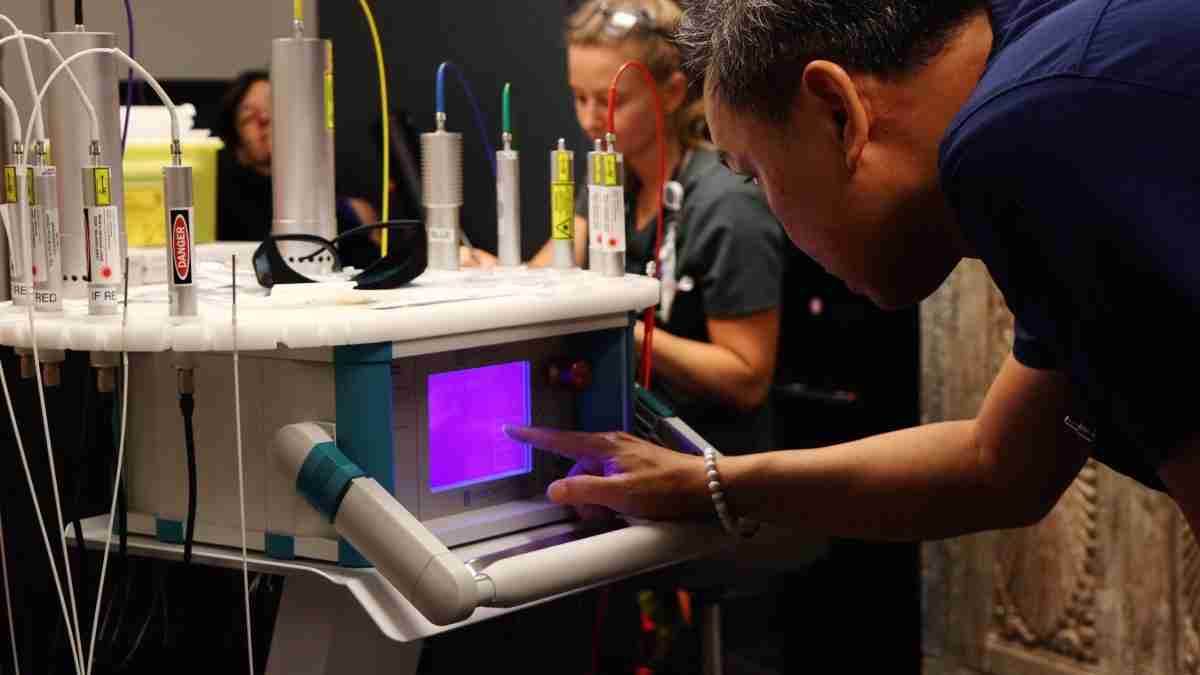 Ultraviolet Blood Irradiation therapy is, in effect the electronic application of ultraviolet energy to about 5 percent of the patient’s blood. On its return to the vein, the small quantity of irradiated blood exerts an action on the total blood in accordance with the laws of spectral energy.
The first treatment of a human with Ultraviolet Blood Irradiation therapy occurred in 1928, the successful healing of a woman patient who was apparently moribund from septic abortion, complicated by hemolytic streptococcus septicemia. She subsequently bore two children.
Ultraviolet blood irradiation was initially developed by the research findings of E.K. Knott. He was looking for a way to combat the effects of poliomyelitis during the 1930s. He accomplished considerable success with this treatment.
Among the more important physiological fundamentals that Ultraviolet Blood Irradiation has been found to provide are bactericidal properties, detoxification effect, vasodilation, photosensitization and photodynamic effects, effects on various proteins, the ability of plasma-treated to absorb oxygen, secondary emanatory phenomena, and effect of general resistance.

Ultraviolet blood irradiation is a procedure that exposes the blood to UV light to boost the body’s immune response and to fight off infections. With exposure to UV light, immune system response increases whilst the UV light concurrently kill infecting organisms, making them “antigenic”. This further activates and directs the immune system to specific infections that the body is attempting to overcome.

Some patients may feel discomfort during the insertion of the needle. The amount of required treatments is determined by the state of health of the patient’s immune system, the length of time the patient has been ill, and the severity of the disease being treated.

It is believed that exposure to ultraviolet light boosts the immune system and continues to provide benefits even after the treatments are completed. Ultraviolet blood irradiation has a cumulative effect, and initial treatments are usually followed by maintenance treatments. Other beneficial photochemical reactions from ultraviolet blood irradiation include improved microcirculation, anti-inflammatory effects, cardiovascular protection through increased metabolism of cholesterol, uric acid, and glucose, as well as the resolution of vascular spasms.